The objective of the course is :

In many incidents the PSV drivers are the first on the scene of many road crashes on major highways across the country. This makes them a possible first resource when it comes to response and assistance to the victims. Many road traffic victims have suffered permanent disability in the hands of untrained responders. To reduce these unfortunate cases of victims being mishandled there is need to train majority of the road users especially the PSV operators and the police who end up dealing with over 70% of cases.

The Association for Safe International Road Travel (ASIRT Kenya) in collaboration with the Emergency Nurses Association of Kenya (ENAK) and other partners conduct these courses with logistical support from Matatu operators and the traffic police who recommend the trainees. 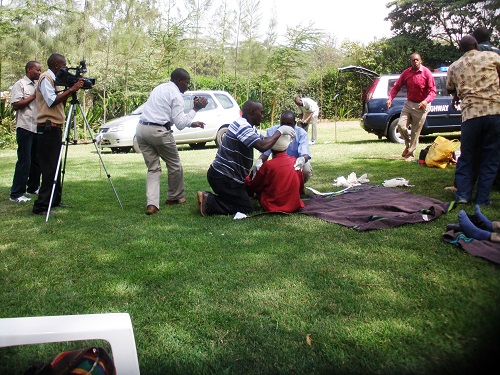 A growing epidemic of road traffic crashes is devastating the next generation of children around the world. Every 30 seconds a person is killed in a road crash. More than 3300 per day  and over 1.2 million people per year die in road crashes worldwide. As many as 50 million are injured. Vulnerable road users particularly at risk, are children. 500 children die every day in road crashes. In many Asian, African, and Middle Eastern countries between 40 and 50 per cent of people killed as a result of a road crash are pedestrians.

According to the 'Road Safety Status Report 2015' launched by the National Transport and Safety Authority (NTSA), on 14th January, 2016, a total of 3,057 people lost their lives in road crashes.

Children are vulnerable road users. Anywhere where there is a potential for moving vehicles is a potentially dangerous traffic situation for children. This is because children:

3. Encourage and assist parents in forming street crossing patrols for their children.

Through partnering with schools and having access to PTAs, parents are advised to teach their children about road safety. This is sensitization during parents meetings and other interactive school activities. .

With partnership with Usalama Watch Initiative, a person was stationed at the road with a stop and go sign (lollipop) to stop traffic and allow children to cross the road safely.

4. Help communities get organized as a key part of creating the long-term cultural changes that will keep children safer on the roads.

5. Use of reflective material to promote visibility

Make sure you enter the (*) required information where indicated. HTML code is not allowed.

back to top
Home